the view from miller

A record of several decades spent successfully deranging a willing audience, The Art of Ian Miller features all the images you remember & some you don’t–

And here’s Henry Farrell at Crooked Timber, talking about Ian’s strong vision of Mammy Vooley as a politically-exhausted Maggie Thatcher.

Matt white walls. Overall hung on the back of the door. Black futon pushed against the wall. A Victorian hatbox, complete with travel stickers. A shelf of books high up along one wall, its line extended on the adjoining wall by four small square canvasses. A couple of larger, rectangular paintings on the walls & several small ones stored on a shelf in the chimney breast: the rest she keeps downstairs. Always sit, she says, in the room. “Never along its edges.” She keeps turpentine in a Victorian inkwell, won’t use white spirit because it’s carcinogenic. “Always have a lid on the bin for turpentine rags, especially in a small room, otherwise you have to live with the fumes.” Rectangular glass palette with a bevelled edge, resting on a pile of boxes, placed low to eliminate shine off the glass. A Stanley glass-cleaner to scrape the palette. Brushes–dull orange, blue and brown–laid out on the varnished floorboards, or next to the palette on ribbed or corrugated paper to stop them rolling about. A tub of acrylic gesso primer. A wire basket full of tubes of oils. Vandyke brown, Indian Red, crumpled tubes leaden in the dull light. Oxide of Chromium (green). Monestial Green. Rowney, Windsor & Newton. Speedball oils from America. Small sketches on French watercolour paper, wavering pencil lines and little dabs of paint, their edges torn neatly along a ruler. On the easel is an unfinished picture. A woman stares out at the viewer. Behind her, more women and children are caught at the vegetable market.

John Timberlake teaches fine art at Middlesex University. He has a long-term interest in landscape & the apocalypse. Unable to attend his “Landscape & Eschatology” conference earlier this year at Tate Britain, & interested in how John’s own work interacts with the apocalyptic sublime, I asked him if he’d like to contribute a guest post for the Ambiente Hotel. Here’s what he wrote–

The piece being shown in the large exhibition “Dark Sky” in Wellington, Another Country XIV, is from a series I made between 1999 – 2001. The works have a complicated geneology (and it’s interesting that one has been included in a show predominantly about astronomy) but as the curators, Geoffrey Batchen and Christina Barton, say in the catalogue, my work aims to expand the conceptions of historical landscape to incorporate fictions and phantoms.

In 1999 apocalyptic themes abounded. I wanted to locate mine to some specific historical and cultural reference points, and also to give them a DIY feel. I made dioramas with painted backdrops, in which skies from C18th Romantic paintings showed mushroom clouds from Britain’s 1950s nuclear tests, photographs of which I’d found in the Imperial War Museum’s photographic archive. The dioramas were photographed and exhibited as large (non digital) prints. The idea of a landscape showing a hazy dream of nuclear war originated there in the museum – the source photographs were in a box file labelled ‘Atomic Warfare’ – an imagined war amidst all the other records of historical events. 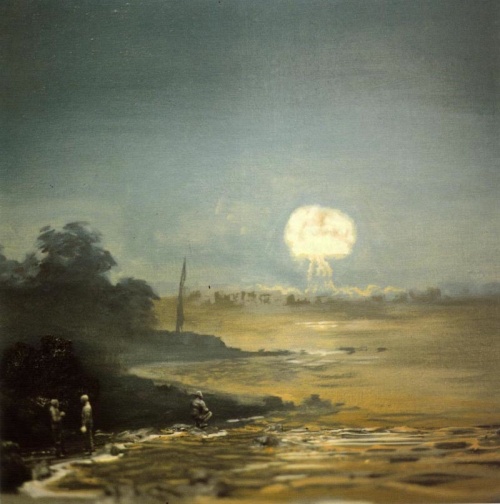 I made AC XIV in New York in October 2001, when my original thoughts around the shifting cultural echoes after the Cold War were being supplanted by the advent of ‘The War on Terror’. I arrived in NY on Saturday 8 September, having gained a place on the Whitney Museum’s studio programme for artists, which is based in Lower Manhattan. Still finding my bearings in that uncanny city, I’d watched the second fireball as Flight 175 hit the south tower of the World Trade Centre that Tuesday from the rooftop of an East 7th St apartment. The composition of AC XIV is based on JMW Turner’s Millbank by Moonlight, with Turner’s moon supplanted by a fireball from one of the Antler tests at Maralinga. In the traumatised atmosphere of New York that autumn, I was particularly interested in the sublime event as rupture(s) in the social fabric as much as a single spectacle in the landscape. Nuclear test photos often contain onlookers with their backs to the viewer, akin to Caspar David Friedrich’s famous early C19th Romantic paintings.In Another Country XIV the figures were not posed as onlookers as much as ‘caught by the flash’, perhaps doing something furtive or ‘unseen’ in the manner of other nocturnes.

My interest in painting has always been focussed on what I see as those moments when it occurs as if unselfconsciously, not as ‘high art’ but rather as a supplement to something. I’m interested in painting when it’s illustration, when it’s a backdrop, and also when it’s an ‘artist’s impression’. This last category interests me because of a sort of inadequate quality. The pictures I’m showing with my friend Ron Haselden in Paris, are ‘artist’s impressions’. After the Another Country series my landscapes moved towards satellite and aerial type views.

Firstly I made photos of model planets called News From Nowhere, then horizonless photographs of waste ground into which I sketched imaginary canyons and mountains. One of these, Colony 10, appeared on the Op Ed page of The Guardian 2/9/06. At the same time I started making oil sketches of the distorted renderings on Google Earth. In this way I conducted a Grand Tour. I found Google Earth quite depressing. There was a sort of ‘anti spectacular’ quality to it, but that also seemed interesting. My own painterly attempts to supplement with added colour, skies etc stands in place of the absence of actual figures in the landscapes. There’s a sublime aspect to this project, but of a very different character to that of the nuclear test work. It’s a fragmented, deflationary, anti-sublime, where power is represented as diffuse (routine satellite surveillance, global positioning systems etc) rather than an overwhelming single spectacle. 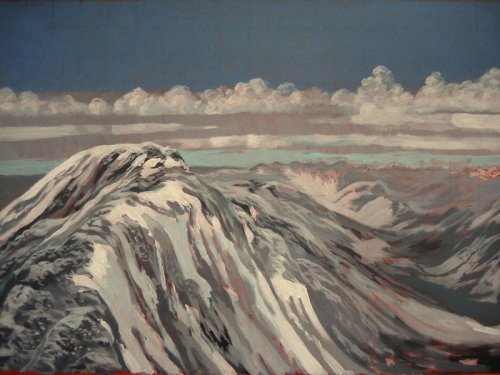 “keep your eye on your inner world”

Dorothea Tanning’s death at the end of January filled me with anger & depression. The more I look at why, the less obvious it seems. I didn’t feel like that when Ballard died. Keep your eye on the object centre left in Interior with Sudden Joy. “The door is not a door on the wild red garden, just on a little something personal, like the door of a house looking in.” –Tanning, Between Lives, 2001.

& speaking of the weird, Eleanor Crook’s astounding sculpture here. (Thanks, Lara.) My favourite–if that’s the right word–is “Eustache”. I wouldn’t want Eustache within a mile of me at night. If I found that he was, I would move house without further thought. That said, I can’t stop looking at him. Futile attempts at denial include work on a short story I used to think of as disturbing but which now appears full of comfort.

John Timberlake recommended Frederick Sommer’s photography & now I’m obsessed by this chicken. Some of John’s own work can be seen here.

“Most of us live in a world where more and more places and things are signposted, labelled, and officially ‘interpreted’. There is something about this that is turning the reality of things into virtual reality. It is the reason why walking and cycling and swimming will always be subversive activities.”

Within a decade, wholly driven by the success of Waterlog, the media cult of “wild swimming” had taken off & was well into the process of commodification & interpretation. Significant points along Deakin’s journey–easily-available pools, beaches & rivers–were becoming stations of the wild swimming cross. You could buy a wild swimming holiday, a score of wild swimming guides & DVDs. Stratification of ambition had set in: some wild swims were clearly wilder than others. Soon you could buy a logbook in which to record your wild swimming ticks. Waterlog abounds in so many sad ironies of this kind I’m not sure I can re-read it. (At date of first publication, he was already wrong about walking & cycling, which had become part of the signposted, packaged & commodified outdoors–the indoor outdoors–long before.)

Finally today, a very short story in the New Weird mode, from an observation of Claire Marshall’s: “It seems darker than other supermarkets.”

send me a neon heart

I love neon, so I was interested in Peter Conrad’s recent piece in the Observer, especially this–

Across the clinical white walls of the gallery, Emin scribbled a maudlin love note in pink neon tubes that looked like extracts from her tangled intestines: “Oh Christ I just wanted You/to Fuck me/And Then/I Became Greedy, I wanted/You to Love me”. … Neon is a medium for public pronouncements; Emin the exhibitionist made it broadcast a private confession. Jenny Holzer has done something braver and more altruistic, employing neon to denounce the commercial orgy of Times Square: her installation there during the 1980s re-educated the signs, curing them of their consumerism. “PROTECT ME,” said a devout revolutionary prayer that blazed on the side of a skyscraper, “FROM WHAT I WANT.”

The deep grammar of those two statements is so spookily, so almost unbearably similar that I want to understand why. Both women are brave. Both women have extracted ironies from neon. (Emin by playing private against public purpose, Holzer by playing advertising against itself.) Both women have come to an understanding about desire. The fact that the private & political grammars are so entangled must be a clue. & while Emin seems to be a political lost cause, nevertheless she understands something important, which is that though the British find loathsome every aspect of the physical & emotional life they can’t control or belittle (or control by belittling), what they loathe most is the display of vulnerability. That’s such a taboo insight we can’t even admit when someone’s had it.

Two of the beauties of John Coulthart’s site are its energy & its breadth of interest. You never know what you’re going to learn next & you can never decide which link to follow first.

Brian Duffy nails it in an interview with the Guardian—

With all this going on, why did he stick with photography? “I loved it,” he says. “But it was only enjoyable because it was mysterious. The revelation [about why a picture worked] came after – when I’d go, ‘Christ, that’s interesting!'” (The Guardian’s square brackets.)

Later, he burned all his stuff. Burning your stuff is always a comedy. I had The Committed Men in a green metal wastebin & the lighter fuel out when a–now long-vanished & for all I know dead–friend persuaded me to give it to her instead. “Do what you like with it, just remember I never want to see the fucker again,” I warned her. Two years later, around 1969, on the phone, “You know that manuscript I lent you… ?”

Adrian Searle seems to be trying a bit hard to catch the importance of Eggleston’s “forgotten corners and empty spaces”, but this will do: “he tunes your eyes and makes you notice things”.