Further to the unfantastic, there’s this–

Does the object exist? Did it ever? Is something lost, or thrown away or was its possession only a dream? Was materialism itself only a dream of a materiality that existed and was known? Are we now after-materiality, in the virtual, in the almost, but not quite, material, as we ‘question the very material existence of the object within Late Capitalism’? Are we left only with lost property – and does that mean we still have something or nothing, or virtually nothing.

In his collection of fragments called One Way Street, Walter Benjamin titles one section ‘Lost Property Office’ (Fundbüro). One Way Street takes all its section headings from the banal poetry of the cityscape and its object world – other examples include ‘Fancy Goods’ ‘Coiffeur For Fastidious Ladies’ and ‘Halt For Not More Than Three Cabs’. The fragment ‘Lost Property’ divides into two sections, articles lost, and articles found. Both pieces reflect not on the lost or found bric-a-brac of urban life but, instead on perception and its relation to objects seen. ‘Articles Lost’ speaks of how a first glimpse of a village, town or landscape is unique – for ‘habit has not yet done its work’. The absence of bearings makes the vista incomparable and irretrievable. We are lost in it. We are the lost articles.

gripped in the vise of use 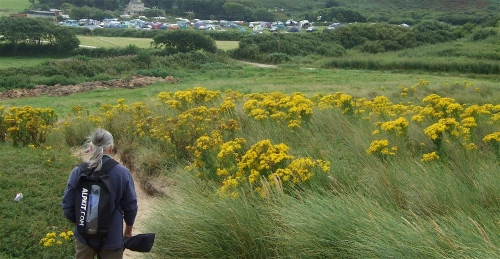 D reads Proust, enthuses over the economics of increasing returns. Forty five, he worries he can no longer hit the softball out of the park. Maybe age is catching up with him, maybe dope has blurred his memory. But his running & swimming program has been successful, & recently he finished laying a patio using something he calls “depleted” or “denatured” or “deconstructed” granite, something like that. Now he plans to get back on track, write again. D is the only writer I know who has read and taken note of Gerard Genette’s Narrative Discourse. This book is such a genuinely useful toolbox, he suggests, we should keep it from the others. “Have you ever used depeleted granite ?”

My bet ? What they will find here is the Iron Chicken. Paul McAuley, who has been a Clangers scholar in his time, may have more to say about this at the increasingly interesting Earth & Other Unlikely Worlds. Or he may not. Meanwhile I am carefully sifting evidence from the relevant episodes.

The problem with these items is that none of them is sufficiently “bizarre”. This is a mysteriously 1960s aesthetic. In the 1960s, a stuffed fox was bizarre; now it is only a stuffed fox. & lost umbrellas ? Lost umbrellas are a Victorian index of bizarreness. They are about as bizarre as a caterpillar on a mushroom, or the “fantasy” in a typical fantasy series. I mean: come on. What’s really bizarre today is this. No one but the Guardian seems to have made much of a fuss about it. & yet it seems a quite startling turnaround, a quite positive event. Or am I just being naive ?

I haven’t posted (& probably won’t, much) because I’m writing. But here’s a bit from a 1984 notebook, which some may recognise in its more written-up form–

We were looking down into a deep Gothic ravine, at the dry bottom of which a well-defined path curved up-hill between overgrown screes. Along the lip of the opposite wall, which was sheer and divided like a layer cake by long horizontal cracks, grew a few thin bent larches and firs. Half a mile or less to the south a high limestone scar rose under the grey sky. Northwards, the path climbed abruptly into the recesses of the cleft and vanished. A light rain had begun to fall; I could hear it pattering quietly on the dead larches, alien and lichenous, scattered over the heaps of scree where some winter wind had flung them.

We walked in silence out of the little bare wood along the cliff edge and stood in the rain to stare at the long featureless green sweeps of moorland stretching north. The head of the ravine was a stony cleft hardly wide enough to admit two people. The path came up to meet us, and we followed it along a small dry valley, sheep scattering in front of us. At the junction of two drystone walls we climbed a stile.

From Trow Gill the path domesticates for two miles, gently losing height amid the lush mixed woodland and cultivated shrubs of the old Farrer estate until it reaches Clapham, a stony, picturesque and prosperous village which once served generations of Farrers and now, squarely astride the A65 Kendal to Keighley road, logically serves tourists and second-homers instead. It’s an attractive enough place in summer, if a little reserved; but it was chilly and almost deserted when we got there. A few dowdy mallards honked from the shallows of the stream. A woman in a head scarf and gumboots stopped gardening to watch us pass, trowel in hand, eyes indifferent. Out on the main road, we waited half an hour for the Kendal bus. When it came it too was empty, but for one bronchitic old man and his sly red-eyed collie.

Reading: Suite Francaise, Irene Nemirovsky, because I so much enjoyed the HE Bates-like atmosphere of Fire in the Blood. Listening to: Bowie, Diamond Dogs.

the name of the roads

Someone got here yesterday by typing “If you had to name your own city what would you call it ?”

Here at the Ambiente Hotel’s retirement wing, we are all up to competition standard at naming our own city. I’d call it Vertebrast. Dunromin. Muntforby. BHX34. Ball Lock, Donkey Trot, Nostrick or Doakenero-Frote.

If I was you I’d drive around that unnamed city randomly recombining words I saw on the backs of trucks. Don’t think I haven’t, because I have.

One word of warning: using some kind of word generator you found on the web is not only cheap, it’s no fun.

Just finished re-reading: William Kotzwinkle, Fata Morgana. I’ve spent thirty years trying to decide if that book is any good & now I’m going to stop. Next in line: Alfred Kubin, The Other Side. I enjoyed it last time, but I was younger & more physically fit. Re-reads that don’t make the cut go to the dump. Louis MacNeice made the cut but he still smells of cat vomit, so he’s for the dump too. I’m going to dump a load of old clothes, & a load of old notes. I love it when I get like this.

I washed my memory stick yesterday–40 degrees, short spin cycle–& it still works. Is that usual ?

We push up into the hill along the curved track. Welcome it. Put our backs into the last fifty yards. Leaning forward, top out among skyline beeches which you say are like the whole of your childhood. I laugh & say: Was that before the war ? Now the wind’s in our faces, the plantation like a black wave on our right. Look! Look! Deer. Crows. The sky in water! Figures on horses in the distance. Everything in the snow black or white, it’s just like a world. It’s just like a real place. Along the track in masted ruts for a minute, then two, then a mile. You accept each rise, looking not for the top but for what’s hard while I’m content to trudge the bracken past dog walkers’ gilets & damp jackets. Then it’s turn & go down, face London spread out like an old box of accessories on a remembered carpet. Back home I think: It’s what we’ve got. It’s an adventure. Woods & slopes were the whole of my childhood too.

Dreams of running again. Or at least some kind of flying & swooping.