Pere Lebrun, comparing styles of direct action in Egypt & the UK, notes: “Meanwhile in the UK, protesters up and down the country are preparing to be politely kettled…” Easy to see which of these populations has the most to gain & which the most to lose: by noon, only the BBC website had a mention of today’s actions in the UK, stressing the preparedness of the police & quoting union leaders on the forthcoming nice humbleness of events. The Guardian, meanwhile, has forgotten that there are going to be any actions in the UK today, giving space to “Britain’s cutest log cabins” (“for when you want to hide away somewhere cosy”) instead; while the Independent, looking into the distance with a similar expression of conflicted rigidity & refusal to make eye-contact, concentrates on “Premier mouser! Vote a new cat into Number 10“, one of their popular “50 best ways of exercising your inviolate right to choice without fear of injury at the hands of the police” series.

People ask, is your novel Climbers out of print ? Yes. But it will be back soon in paperback from Gollancz. Significantly, perhaps, the UK publication of Pearlant is scheduled for 1st April, 2012. The short story “In Autotelia” will appear in Night Shade’s anthology Eclipse 5, ed Jonathan Strahan, in May 2012.

your voice in my myth

Emma Forrest’s Your Voice in My Head has been on the shelf for two weeks, along with three Alan Fursts & two Roberto Bolanos. The Fursts & Bolanos are falling one by one. I keep taking Forrest down, hoovering up a couple of pages & then deciding to save her for later–for some moment in which I can do real justice to her rich combination of narcissism & narcissism–but now, somehow, there are only thirty pages left. Furst on the other hand has become so disappointing I want to weep, The Foreign Correspondent a real low; & 2666 isn’t yet frying me the way The Savage Detectives did in 2009. Otherwise my reading is scrappy. Two pages of Jacob’s Room one moment, a desperate attempt to re-read Night Dogs the next; then the LRB. Richard Ford & Jayne Anne Phillips do not presently work their magic, which is to fill me with elation at being a writer. How irresponsible of them. I watched Inarritu’s Babel on Saturday & found it an irritant, essentially an act of sentimental titillation; which makes me wonder about his others (& about Arriaga). I’d been saving that, too, after being at least electrified by Amores Perros.

This is an interesting discussion over at Strange Horizons, though you have to follow the links to get the benefit of it. I’d like to see someone collide Greer Gilman and Emma Forrest, although I suppose it’s culturally unlikely that anyone who could, would. Your Voice in my Head, already laying open–& being laid open by–a myth or two, suggests a contemporary start-point for a program of revision. (Also, I guess, myth aside, self-harm, sex-addiction & narcissism as a kind of shamanic flight-into-flight.)

PS: Somebody arrived here this morning by typing “how do you gape a arsehole” (sic). I report what I see.

I saw myself as taking an author from behind and giving him a child that would be his own offspring, yet at the same time monstrous. –Deleuze.

Lovely images by Tobias Zielony, of Le Vele, Naples, up at Our God is Speed (which I got to via Pere Lebrun).

Putting things down: the crime describing itself as Pearlent unspools, increasingly weird, challenging even, 500 wpd interrupted by periods of mania during which I do a day’s work in an hour & then gabble the whole afternoon about it to C, who looks pained. I can hear myself but I can’t stop. I spent the 1980s in that condition, reaching it without chemical stimulus. No wonder I’m tired.

Reading: Ballard, collected stories; Bolano, Amulet & 2666; Alan Furst, The Foreign Correspondent. Looking forward to The Black Swan, which seems to have everything that interests me including obsession, madness & a woman who thinks she’s growing feathers. 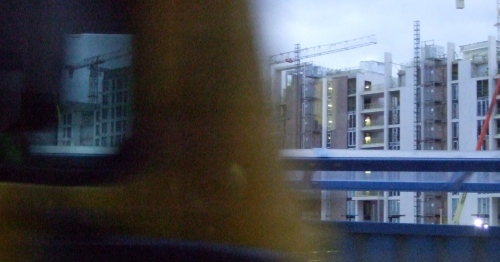