In central London it’s coming on to rain. The streets already look dark at half past one in the afternoon. You can tell it’s December. You can tell there’s a recession. A group of exobiologists wrangle half-heartedly in an empty Pret a Manger. “I think physics is telling us that though life evolved in a cheap beach hotel in Sri Lanka, it will end in Mansfield.” Central London is always a comfort. Look around in central London & there’s always someone weirder than you. “Most of the new topology is telling us that if the universe has an arse-end, that’s where it is.”

2010 books: I loved The Unnamed by Joshua Ferris. Will Self’s Walking to Hollywood represented the upside of professional reviewing–a book you’d pick for yourself after reading the first two pages. John Wyndham’s extraordinarily incompetent Plan for Chaos represented the downside. But The Strange Case of the Composer and His Judge by Patricia Duncker was possibly the least likeable novel I’ve ever read. Smug, self-congratulatory yet much less clever than it imagines itself to be, exactly what you’d get if Julian Barnes began to think he was Daniel Pennac: a collection of complicit nods & winks to an equally smug audience.

Best re-read: Let It Come Down, Paul Bowles. Biggest indication, other than the excoriation of Nick Clegg, that there may yet be justice in the world: David Constantine winning the BBC short story award. Best TV adaptation: William Boyd, Any Human Heart, but the book is in all ways more satisfying.

Most laughable TV adaptation: the Moffat & Gatiss Sherlock Holmes; though I hear that Neil Cross’s “Oh Whistle & I’ll Come To You My Lad” was in a class all its own. UK low-pomo is old now. I predict a decline of the audacious revisionary manner (the glibly blinkered celebration of culture as Markov process). & if it’s replaced by eye-watering textual & historical fundamentalism, you’ll know who to blame.

shooting fish in a barrel

There is no one like Jonathan Meades for fizz, self-aware bluster & insane eclecticism picked out with two- or three-word phrases which in context seem almost divinely accurate (here, for instance, “recriminatory caricature”). He is truly the Will Self of British cultural criticism. You don’t even have to agree with him to enjoy him. Watch how that first paragraph aims itself in a weird, writhing, multidimensional way (as if a straight line would not be the shortest distance between these points), from an English cliche to a syphilitic German Modernist, before pulling the perfect wingover, turning on the siren & screaming down at its target. Then enjoy the howls of defensiveness & childlike misery of the victims below the line.

Appetites braced by JM’s finely trimmed red herring, the permanent residents at the Ambiente Hotel will be looking forward even more keenly than usual to both Christmas dinner in the Function Room & the traditional Boxing Day immanence vs transcendence debate (taking place this year in the downstairs back bar). 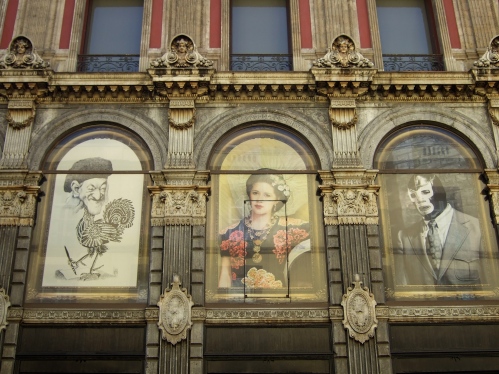 Best of luck to everyone!

Alyssia Fignall discusses the Christmas menu with an unnamed member of the Architectonics Committee.

(above) A view of the Function Room windows, as seen from the pavement in Codmorton Street.

…it’s like the Map Boy, when he talks all night this way, his head clearly visible behind the glass of the Mexican box on the mantelpiece, is trying to educate us how to see everything as objective correlative. Everything interpretable in some strong Ballardian sense, dune fields as much as Hilton balconies. Yr own hand in certain lights. & in uncertain lights a line of railway sleepers or sleeping women who (like Delvaux, or Henry Moore tube dwellers) explain something unknowable, something that remains unexplained even in the gesture of offering. Everything an earnest, he tells us, a guarantee, both of itself & something else. Immanence: the constant act of interpreting things that weren’t made. The Map Boy says, it’s like the world is a difficult painting of something. It’s the understanding of stuff not directly–not even indirectly–not even one time removed–but by the index of something that might, if you look at it in the right light, be evidence of the possibility of evidence.

How do you understand a thing by its shadow when you don’t even know how shadows are thrown ? If you think you can answer that question, the Map Boy says, if you think the need to answer is implied by me asking, you are not getting this & we may have a problem. It’s so clear to him! Someone doesn’t even know how shadows are thrown, how beautiful is that ? It is very beautiful indeed. It is every day launching into the unknown like Cordwainer Smith’s first go-captains, or Bill Gibson totally got it in the perfect short story “Hinterlands” which, the Map Boy warns us, he doesn’t see as being about cargo cults at all but the ultimate unknowability of things forcing us back on shamanism…

Thatcher’s anti-union laws, left in place by New Labour, are on the statute book for just these occasions. But we must not let the law paralyse us.
–Len McCluskey

Meanwhile, elsewhere in Gurdiana, Land of the Increasingly Conflicted, today’s editorial gives us the most perfect parody of the smug, established, middle-aged neoliberal voice. The old & the young are to take their telling-off & defend the postwar settlement the way the headmaster has chosen: by saying something glibly clever as you watch the ConDem handymen rip it out like the ghastly old fashioned kitchen in an otherwise rather cheerful little workingman’s cottage.

getting ready for the party 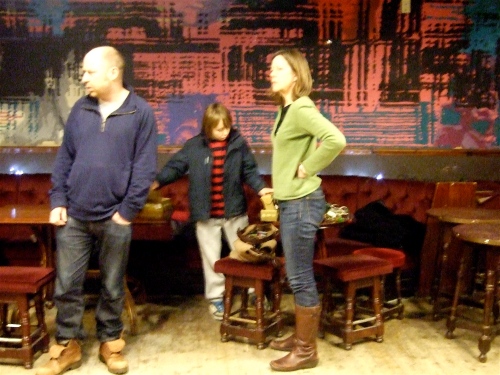 Let’s invent a word so haunted, so transformational–so transitional–that the moment you type it your soul is sucked through it & into communication with & exile from everything. “Everything” being the truth about the world, in the sense that it is the world. “The truth about the world” being that it’s everything in the world–& though you were always in the world, now you are in there with it, which is a different matter altogether. It is not a truth you wanted to know, this quality of the world being able to lie alongside itself & yet remain a single thing. But you spoke the word. You turned the key.

& in pursuit of the argument in the post immediately below, two quotes from Robert Bly’s classic “A Wrong-Turning in American Poetry”.

He opposes Eliot to Lorca–

The phrase “objective correlative” is astoundingly passionless. For Lorca there is no time to think of a cunning set of circumstances that would carry the emotion in a dehydrated form to which the reader need only add water.

He calls for an image which,

being the natural speech of the imagination, can not be drawn from or inserted back into the real world

As a teenager I always thought of this as the effort to suggest something which can’t be suggested otherwise, “an animal,” as Bly calls it, “native to the imagination. Like Bonnefoy’s ‘interior sea lighted by turning eagles’, it cannot be seen in real life.” What’s the point of imagism otherwise ? –in Eliot’s formulation it risks becoming nothing more than a method of generating posh similes, a way of somehow trammeling the imagination, cleaning it up & putting it to work on behalf of the literal.

A fantasy is not a promissory note, cashable in the bank of the real. A fantasy should attempt to stand for something that isn’t there; somewhere in the turbulence generated by that attempt, it should imply all the things that are.

–a Texan writer, finds she has run out of vanished, exotic & geographically distant cultures to loot for the milieux of her immensely successful fantasy novels. She’s bored by the costume museums, post-Steeleye Span folk rock bands & archeological websites devoted to back-engineering weapons through the ages that have previously provided inspiration, colour & filler. She’s bored by the grim daily round of combining non-scientific anthropology & Campbellian myth with freedom motifs to provide uplifting developmental arcs for her characters. She decides instead to actually make something up. The central race–the “Sentienta” as she will call them–of her next novel are to have transparent foreheads, behind which can be seen their pulsating neural tissue & the wispy filaments which connect to eyes like greenish half-billiard balls. It’s very exciting. The human imagination is a truly astonishing thing.

Signage is an act of enclosure. It claims the landscape for state, local authority & commercial bodies, redefining it as a set of basic decisions & choices granted to the user. This is all very well in the mall, or the Queen’s back garden, which are so evidently not commons. But signage is now used to add value & “identity” to entire landscapes, the relaunching of which becomes an act of enclosure by commodification, of a space which, if it wasn’t entirely real in the first place, was at least defined by local quotidian human usage. Anyone who, in the 1980s, watched Holmfirth in Yorkshire being taken gently away from its inhabitants & then returned, postmodernised, as the non-place “Last of the Summer Wine Land”, so that much of their livelihood would now come from selling a fiction of their home (& thus of themselves), understands what an unheimlich process that is.

the unbearable smugness of Michael White

Protest naicely & you protest unsuccessfully. Protest successfully & you fall into the double bind prepared by the seedy lawmakers & rhetoricians of the Blatcher era.

Worse–much, much worse–you render yourself vulnerable to the unbearable smugness of Michael White, who, observing the attempts of two generations to drag themselves out of the sticky neoliberal dream, patronises them as if from a great height.

Now that the twelve year olds have–out of an astonished recognition of the sheer moral abjection of the world in which they find themselves–brushed him & what he represents aside, & at last persuaded the left to stop regarding itself as the love that dare not speak its name, can we have some action from the unions please ? Do they remember who they are ?