Delighted that David Constantine has won the 2010 BBC National Short Story Award. His stories aren’t just thoughtful & beautiful, they find the existential strength in human fragility. They’re honest. They regard the reader steadily, with an emotional candour which makes them impossible to ignore. Quite surprising –& vastly attractive–in an age of literary bombast. Congratulations to Comma Press, too!

Because, “mad or chill/obsessed with angels/or machines,/the final wish/is love”. It’s freezing cold in here & upstairs one of F’s students is playing Three Blind Mice on the keyboard over & over. I’m making lists of authors, carefully grouped. Ginsberg, Burroughs, Pynchon is one group, for instance; but Burroughs, Pynchon, Denis Johnson, Robert Stone, that’s a whole other thing. Turgenev, Chekhov, Mansfield, Isherwood, Bates, is an aspect or axis; Turgenev, Chekhov, Gorki, WH Davies, Genet, Eric Muspratt, that’s another. Are you going to put Burroughs in there with these guys ? How can you not ? Well, it’s as much of a problem as, Are you going to, at some point, admit that you need to make a bundle which includes Robert Stone & Charles Williams ?–which you should, really, if you think about it. The writer who appears in the highest number of bundles, over the longest number of years, is that your “favourite” writer ? Or is that the writer who appears in the fewest ? Or is the writer who’s your “favourite” the one you forgot when you were 13, because this is what happened: one day a mysterious book with no dust jacket, no blurb, no author’s name, no title on the spine, appeared on the library shelves; you read it & have been seeking it since in everything you read or watch or listen for, in everything that’s invented & everything that isn’t. You’ve been trying to write it into existence again, between covers that aren’t any colour at all. It was the Robert Johnson moment in your life, everyone’s had one.

Reading, Poe’s Children, ed Straub. Listening to: “Like a Rolling Stone”, on repeat. Here’s a picture for you, thick frost on the balcony, bright sun in the tideway just past these streets, a single contrail diagonal to all else; a piece of medieval-looking scaffolding, up against the next house along like a thousand years of logic. The usual obsessive compulsive morning in village Barnes.

A swimming pool full of code. A vocabulary of interestingly combinable algorithms. A failure-of-memory palace bricolaged together around writers I remember from being very young. The usual combination of playground and fever-hospital. Bad dreams crawl over everything like the images on Emil Bonaventure’s sickroom walls. There is no shelter from the absurd. Some of the characters from the previous two books topple slowly into view, drowning as ever. Anna Kearney, who has spent the last two or three decades “pretending to be an adult”, begs less for redemption than for closure, her generation’s feeble substitute. Ascheman’s ex-assistant, lacking the history to be a feeble substitute for anything, has a journey to make. Some characters who reappear will not be human, or even “alive”. Downward causation. Voices in entangled states. Stars like cheap Christmas toys. The failure of past and future to sit in the accepted relationship with one another. A man walks through solid objects. All this against the background you would expect from Light & Nova Swing. Will there be answers ? What do you think ? (This modified from an interview by Nuno Fonseca, done some time ago, which I don’t know if it’s appeared yet.)

the guests at the ambiente hotel

A reader from Leicestershire asks, Why are guests seen so rarely at the hotel ? Reader, there are plenty of guests, but you only see them when you first arrive! The rest of the time they are stored in humane conditions. 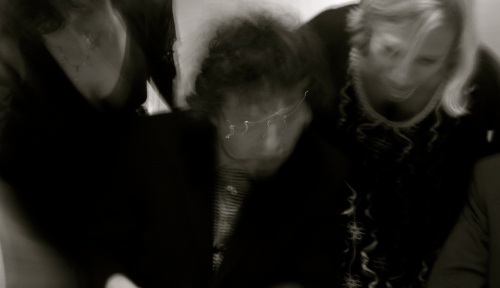 Deployed primarily in the dining room and the lobby, the guests in this picture are for the most part kept underground. Of the guest problematic, AE Funnel has written recently: “Their hold on reality is tenuous. Although there is a sadness to their voracity & yearning, the behaviour of guests resembles that of any other flock or swarm. They pour constantly through a given room even though there is only one of them resident at a time. To the long term habitues of the hotel,” she concludes, “they don’t seem very robust.” For this reason, never address a guest seen in a corridor late at night.

I enjoyed Roz Kaveny’s excellently funny piece on how sf ratchets up the audience’s boredom by pandering to it; how that creates a tightening feedback cycle of loss; & how, in a kind of compensatory gesture, a hundred years of desensitisation to its own source material has made sf strong & proud. With all her customary slyness Roz points out that, as the emotional returns diminish & the sense of wonder is replaced by the demand for product, sf, like any other kind of porn, becomes a response to the audience challenge, “Make me feel something!” –a combination of boredom & satiation, impatience & despair which, incidentally, dares science to replace science fiction–to take on science fiction’s sensationalist function.

I wonder if it’s going too far, though, to imply that sf fans still have difficulty making a distinction between the real & the imagined as long as the latter is authenticated by being written down repeatedly ? I think that could put some backs up.

1. Pinkish and surrounded by brand new wire netting, the surface of the tennis court is already sinking into the mud, so that the drainage channels around it, which are still to be filled in, look more like the remains of a half-hearted rescue attempt.
2. Someone has scratched the mileage off the nearby road signs, as if to hide the town or perhaps deny its existence. Self-abnegation, a complex act of defiance: we are not here for you. We are not here at all.

3. Looking through the lacework of a broken wall you see a man standing in the sun at a baking road junction, holding a pane of glass which has broken directly across, half in each hand, while he stares emptily into the distance through the heavy summer traffic. A woman with a buggy stands near him but ignores him. She might be with him or not.
4. Complete the following sentences: (a) They had once been nice little houses, half-timbered and with tall, elegant, steeply-pitched roofs. Now, trapped between the sewage works and the railway line, they… (b) New build was going up all around them. Soon they would be encysted. People would look at their Queen Anne chimneys and wonder what things had been like before…

You can just hear Dave’s people ringing the Palace, can’t you, “What we really need now is the biggest, most tribal, most simple-minded psychodrama to take their minds off it all & get them pulling together. ‘Terrorism’ won’t be enough this time. It needs to be something like, oh I don’t know…”

9:25pm, I’m watching a TV programme about the Jewish transports. I’m watching trainloads of Jews arriving at Auschwitz, or trainloads of Jews being used as trade goods towards the end of the war. Then I’m watching the ad break. The first ad is for Lloyd’s Bank, with its streamline cartoon train & its slogan, “Lloyds: for the journey.” After that, it’s an ad for Call of Duty: Black Ops. I get up & turn the television off & go to bed. I’m finding it more & more difficult to cope with these kinds of connections & before I fall asleep I wonder if I could find a house somewhere that doesn’t have TV reception or broadband, or perhaps even electricity. You can cook perfectly well with gas, but its biggest advantage is that you’re not tempted to use it to keep in touch with your so-called culture.

We make fiction for the same reason as we make buildings: security. Rigid notions of causality in fiction have developed as shelter from a fear of the unstructuredness of actual events. Few societies have been more afraid than ours of losing a status quo that was illusory in the first place.

In 1995, Sara Kane’s play Blasted was vilified for breaking without warning its own dramatic continuities: what seemed to be a naturalistic, contemporary two-hander about a rape in a Leeds hotel room was blown off track without explanation. Whatever Kane’s intentions for it as a formal stratagem (& whatever the subsequent mayhem), this unpredictable intrusion into a recognisable if unacceptable situation caused massive trauma in the audience’s defences against the arbitrariness of the real.

The recognisable comes, by definition, with a familiar set of ideological interpretative tools & constraints. We would prefer to watch a drama in which the “character” & “motives” of rapist & victim play out in the argument of narrative until a conclusion is achieved. We would prefer to see a bad thing rehearsed than engage a thing we can’t predict, a thing that breaks our context & forces its way into our “conversation” about “our” world.

Though it’s a powerful argument on behalf of Blasted to claim that there are plenty of places in the world where the continuities have already broken down, & such poorly-plotted intrusions are commonplace in real lives, it’s not one I would want to resort to; because its intent is to salve the audience’s hurt feelings by claiming that no breakage has occurred. It panders to the fear of the arbitrary by reframing events in a recognisable structure.

In human affairs, this argument goes, the random intrusion of war is the explicable face of inexplicability, the meaningful face of meaninglessness: it is an available trope the use of which reasserts credibility, healing up both the perceived wound in the structure of the play and the genuinely wounded expectations of the audience.

It’s an argument which is in itself a form of hiding, a pushing away of reality to a comforting distance. After all, meaningless & unpredictable intrusions into the orderly flow of life are not limited to war zones or failed states, as anyone living on either side of this hole will freely attest.

Incidences of telekinesis disturb the hotel at night, rearranging small objects, papers, items of clothing. A pair of shoes moves an inch to the left. A cupboard door is rattled so quietly that no one wakes. Bunches of keys, placed on their hooks in Reception in the early evening, are discovered under a breakfast table at eight am. Some objects are moved once, others several times across two or three nights. “An intellectual history founded on anthropocentrism,” writes Alicia Fennec in the Theory Cadre journal, “encourages us to think of telekinesis as caused. In fact these events occur without agency, intent or telos. They are not communications. They do not support a ‘story’.” Tiny changes of air currents are recorded at the base of the kitchen range. A computer, switched off at eleven, is switched on again by seven. A brief flash of light is observed to have occurred in an empty fourth-floor bathroom. 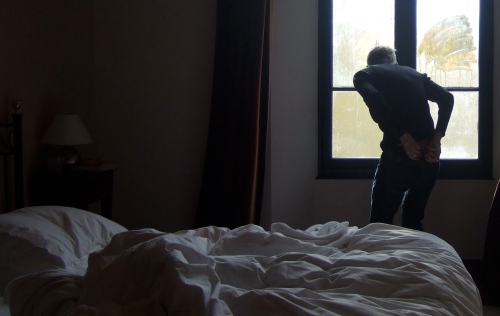 For several weeks, waves of improbability ripple nightly along the corridor outside Room 121 &, meeting the back bar staircase, which seems to act as a barrier, disperse.