I was supposed to do a gig with a celebrity, a moderated conversation at their place, which lay deep in a set of large brick buildings, interconnected run-down old agricultual spaces, Victorian and showing it. Dark, high-contrast values to the light, as if some sort of filter had been over-applied. Someone asked me to go and buy something. I was reluctant because I didn’t understand the currency, and we were about to start the conversation, and anyway I wasn’t sure how I would find the shop. When I found it, it was like some very old-fashioned chemist’s. People were queuing without giving each other space, so I left. After that I became progressively lost. The neighbourhoods were unfamiliar–except in their layout, which was structurally that of London—with an architecture that might have been genuinely exotic or postmodern and inauthentic. There were open vistas with wooded hills, shoulders of land with houses scattered along the sides. At the same time, it was all traffic lights and tube stations the names of which I couldn’t make out, rain. First I was late for the interview, then very late. Every time I chose a new direction in the belief that I recognised a feature—an intersection of streets, the corner of a building—the landscape became a bit more bizarre. All around were the dark, saturated, varnished colours of the filter. I heard the police talking on my phone! I tried to ask for help, they couldn’t hear me. When I stumbled back into the place I’d left, the moderator had had to go back to Indonesia. I was in tears because I had spoilt the interview. The celebrity and organisers were disappointed and angry. Then I realised they were smiling and teasing. They were amused by me and the whole episode. But I still felt guilty, ashamed and awful.

I can hear you

Metaphysics: a brand that has sheltered a billion crazed subjectivities & subjective epistemes, emerging from scarified metaphors, mad culty insights, wonky observations, unbalanced personal alchemies & dogmatically institutionalised intuitions about the shapes of things & how they bolt one to another in the service of human “existence”. I love it all & I especially love the imagery that spills from it in torrents. It’s a whole Woolworths of pick n mix. I love it for all the reasons I love physics, but I don’t mistake the one for the other as a description of how things work; nor am I really interested in a particular metaphysics, or the history of metaphysics as a singular discipline or single object of study. I’m just on the lookout for a glittery concept, a slippery notion, or a deeply debatable cognitive structure I can make fiction with. What I want is to stumble over ideas that have sudden hi-res qualities and instant impact. An idea that has that kind of force, & that immediately charms me by entangling with metaphors I’ve already made, will find itself in a month or so part of the personal pathology of a short story about something else entirely. I’m a user of metaphysics, not even an amateur. I’m a user of physics too. I’ve not been the same person, let alone the same writer, since I discovered that a percentage of white noise injected into the input can, counterintuitively, amplify frequencies previously too faint to hear. Culturally, writers & readers operate in the same kind of noise-rich environment as electric fish. They live in a similar neurobiological arms race. Since Alastair Reynolds explained neurobiological stochastic resonance to me 20 years ago, my definition of a science fiction writer has been: someone who’s acutely aware of a concept like that even as they write something that never even mentions it.

Feel increasingly odd. But not quite sufficiently odd to start off in a new direction. English ghost stories & religio-mystical paintings from the 30s & 40s have begun to interest me over the last few years. I don’t know why. It’s not the obvious top layer, or anything they thought they were doing. My head is trying to make patterns with this stuff & how we are now (how we feel we have to be). It’s trying to draw conclusions but they aren’t logical; they aren’t even visible, really. It’s looking for something to braid with & it has, as ever, its own motives. So far I’ve only seen the edge of that. (But maybe this is a canard, a way of distracting my attention. Maybe when things change, it won’t be in these directions at all.)

I like the holes in that building. I wouldn’t call them windows or doors, because of the state they’re in. I like any building the exterior chimney of which is peeling away from the wall of the main body. And that ivy! That ivy is like quiet vomit coming from the upper storey. Why was the house fixed to a slope in that way, not steep but noticeable? How has it stayed there all these years, without just sliding down into the river? I like the house but I would never go inside and walk about among the rubbish on the floors. All that old furniture indicating a life, or lives, lived before the place fell into… what? Disrepair isn’t quite the word. It was a transfer of power. People moved on, built new lives. I wouldn’t enter, but I would look in through the door. I don’t want to know what happened here before things got good and then got bad again. 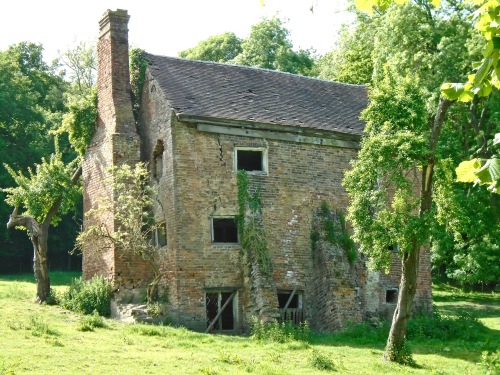