The above advice should not be taken as advice. If you take anything that appears on this blog as advice, your aspirations may not be met by the publishing industry. This disclaimer was brought to you from the kitchens of the Ambiente Hotel. We don’t have a returns policy on the Squid Surprise, but you can sometimes come to an arrangement with the boy who serves in the back bar.

Just caught up with Shane Meadows’ This Is England (2006), the odd, violent, chokingly funny & very sad coming-of-age of a 13 year old skinhead in Thatcher’s Britain, filmed in Nottingham & Grimsby. It’s difficult to cheer, shout with laughter & cry for the whole human race all at the same time; but two scenes between Shaun (Thomas Turgoose) & his girlfriend Smell, played by Rosamund Hanson, caused me to do this. 20 hours later, I still have to endure the trauma of acute bouts of smiling. (Partly because I’ve got Toots & the Maytalls’ contribution to the soundtrack playing on repeat.)

Also caught this week: Frozen River. Liked that too.

In response to the Guardian (not to say Elmore Leonard), Tim Howard has new advice for would-be writers. This Machine Kills Purists is a serial offender where the Grauniad book pages are concerned, having produced a sly piece earlier in the month.

They cherrypick your backgrounds & return them to the industry standard you were determinedly working away from; gut your structures of any difficulty & re-present them as being unwittingly “correct” (how amazing that you were almost doing it properly); & wilfully fail to get the point of what you write so they can pretend that having a point isn’t the point of writing. Oh, they love you, they don’t want to upset you; but more importantly they don’t want to upset anyone else. So they take what they want & leave everything designed to make your stuff upsetting. Then they wonder why you won’t give them a quote for their novel. The pets. Your heart goes out to their turmoil. 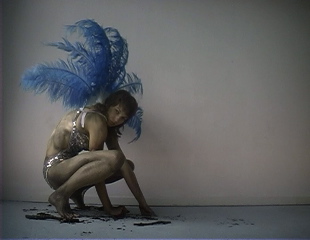 “This woman’s insistent contact with the audience isn’t just entertainment; it’s a visceral search for the limits on how to interact honestly with fellow human beings.”

I care so little about the content of this paragraph that, I warn you, I am just not interested in talking about it–

My reading of Brown, from talking to ministers, is that he did have a period of near-meltdown – when he realised that the wheels were coming off his premiership, and he was staring into the political abyss – but has partly recovered since. He is clearly tougher than those ministers who were plotting against him, but proved themselves serial wincers and flinchers. He has found, once again, a story to tell. [My emphasis; & the quote is from here.]

–but look at that last sentence. I feel contempt for the “story” of things. It is a horrible, patronising, 90s notion. Being told stories is precisely what led to my electoral apathy in the first place. Not to say my sense that the contemporary fourth estate, with its desperate profusion of narratives, narratives of narratives & meta-narratives of those narratives, is more trouble to the user than it’s worth.

Why would I vote for people who admit they’re selling me a story ? I would be voting to continue living in this willed dream in which everyone knows they’re a fiction supported by fictions but seems unable to do anything about it. Once she has written the last sentence of the paragraph above, the only possible response to Jackie Ashley is this: Now that, between you, you’ve fictionalised everything–now that you’ve reduced everything to what even the saddest adult-fantasy consumer would recognise as a “secondary world” –now that you’ve answered the question “What’s the story ?” by admitting that the story is the story–why should I bother ?

I’m not even angry, really. The only thing that still rankles is the damage to the reputation of my own medium. In their pursuit of “a story to tell”, the politicians, the lobbyists, the brand managers, the cultural academics, the chattering classes & the news media have done almost as much as Hollywood & Joseph Campbell to bring the entire concept of fiction into disrepute.

The cat has grown very vocal in his old age.

I’m thinking of renaming him Bagpipe.

I love to talk about writing in general. If that’s of any use to people, I’m glad. But I can’t give advice here, or privately, about individual pieces of work.

anyone read the book ?

I see Martin’s latest campaign is going well. Nice of Anna to help by venting in public. I’m sure it’ll move units. But can we agree that the important thing here is to allow everyone involved one of those acting-out opportunities that grow so precious & fleeting with age ?

Reading: Second Nature by Michael Pollan. Pollan, a bland & readable gardener, claims to have found–or at least to be seeking–a “compromise” between managed & unmanaged outdoor space, but guess what, his intent is to defend the gardener’s view of nature (ie, that it’s best not left natural) against the view of the naturalist; his greatest fear is “the evident speed and force and thoroughness” with which the forest can erase “virtually every human mark”; & his best line is “nature abhors a garden”. So no anthropocentric demonisation going on there, then, perish the thought.

Reviewing: Patricia Duncker’s The Strange Case of the Composer & His Judge.

You wouldn’t think anyone could write, “The next great chapter of my life was about to begin,” and get away with it. Paul Watkins can, because he is able to manage such a weird balance of irony and honesty. The “Paul Watkins” implied by his novels meets life with simple directness, later transforming his experience, on our behalf, into thrillers. Reading him is like being subject to a friendly, candid stare in a crowd: you want to look away, but you sense you would lose an opportunity if you did. Then you realise, probably too late, that the opportunity is a little less candid and a little more complex than you expected. You’re hooked through the gills, when two minutes ago you didn’t even know this person. You’re in Watkins’ shadow version of Newport, Rhode Island, being introduced to another of its shadowy fisherfolk inhabitants.

Born in Dresden in 1964, Paul Wedekind studies engineering until, on the eve of his national service, he is induced by the East German secret police to spy on his friend Ingo Budde–cheerful rogue, bland bullshitter and possible heroin dealer. These two serve with the Russians in Afghanistan, where Budde develops himself further as black marketeer and torturer. They are captured by a CIA-sponsored Afghani unit in the hills outside Kabul. Paul watches dazedly as Ingo’s teeth are filed down, then as his friend is dragged away to be beaten to death. Released in an exchange of prisoners, he finds himself listed “killed in action”, transferred to the GRU/KGB and sent to the US.

There he meets Sulieka, single-handedly running an operation to exchange smuggled Russian diamonds for dollars. Sulieka is raw and nervous, rough but real. With her help Paul settles into the life of a fisherman. They fall in a guarded, edgy kind of love. Money falls into their hands after a botched submarine rendezvous and a wreck at sea. They fall out of the habit of being spies, buy their own boat and become “real” fishermen. All seems calm, at sunset and at dawn. Then, in the chaos that follows the fall of the East, Ingo Budde comes back for revenge.

“…you left me,” he accuses. “You said you wouldn’t leave me. That means no matter what.” And: “You were the only friend I had.”

This novel has the elements of a classic thriller–exotic locations and outsize characters; women known only by their bizarre forenames; wars, revelations and fights in bars. There are grotesque wounds and acts of quite amazing savagery made credible by Watkins’ careful tone. Things are still flying about on the last page, like the best filmic slo-mo explosion. It is all very satisfying, but there’s more.

Paul tells his story in fits and starts, reluctant to face his memories but determined to do it anyway. He appoints us to interrogate him–or at least listen to him as he interrogates himself. He admits one thing to us, he admits another. The third thing he admits means that he must amend the first. There are overlays and imbrications. Small betrayals feather the body of deception. Small lies total into large ones. (“I hoped that I would one day look back onthis as an unpleasant but neccessary job I once did a long time ago for my country,” he excuses himself.) Each appalling event in the record is swaddled in a kind of numbness. Things happen–literally–before Paul has quite understood what he is looking at. The effect is gruelling.

As for names: well, names are surfaces. They shiver at a touch and break up, revealing much more complex stuff beneath. Identity is a form of bullshit, claims Watkins with some accuracy, but bullshit is in itself quite complex stuff. The following anecdote, clearly a warning, or statement of intent, appears early in the book:

“Biagio’s name was pronounced Bee-aj-ee-oh, which the locals had abbreviated to Bad Joe. So many people would come into this bar asking who Bad Joe was that Biaggio made up a story about Bad Joe being a notorious fisherman who died at sea with all his crew and whose ghost still haunted the dock. That was why Biagio liked to keep the fisherman’s theme to his bar, with nets strung out across the walls.”

Bad Joe’s nets have never caught fish. Names catch only a receding shimmer of truth. “Wedekind” is so easily anglicised to Watkins. Someone called only “Sulieka” is credited with the jacket-photo of author Paul Watkins as simple fisherman. There’s fog in the bay tonight, and The Story of My Disappearance is suddenly less a thriller than the aftermath of a collision betweenTo Have and Have Not andPale Fire, an event somewhere along the interface between male self-presentation and outright gleeful lie.